You still have time to enter our 2011 Photo Contest taking place until July 30th. We are looking for application images of Cornell Pumps (Municipal, Agriculture, Industrial, Refrigeration, and Food Process) from all over the world. Enter now for your chance to win a $150 gift card. We ask that you use our uploader (click link for page) ... but you can also email them into us here at pmclean @ cornellpump.com.

Contest begins now and ends June 30th, 2011. Cornell Pump's Photo Contest begins May 16th, 2011 and ends July 30th, 2011. By submitting an entry, each participant agrees to the rules of the contest and is 18 years of age or older. To enter Cornell Pumps Photo Contest, submit your information and your photo through our website. Online entries only. All information is required and Cornell reserves the right to discard entries that are not fully completed. Images are limited to 2048K (2mb) in size and must be .JPG or .GIF.

The 10 finalists will be contacted for high resolution images upon completion of contest (3mb or higher). By entering our contest, you grant Cornell the right to distribute, display, reproduce and create works of our own, in any media form. Cornell Pump will not be required to pay out any additional compensation or additional consideration with such uses. All entries must be received through Cornell's photo uploader by July 17th, 2011, 12a.m. pacific time. Judging will take place here internally for the first round of participants. After, ten (10) finalist will be selected. These photos will displayed on Cornell Pumps website and you, the user will be able to vote on your favorite one. One vote per day, per person. Decisions of the the judges will be final. Please do not contact us about the status of the entries. The ten (10) finalist will be notified on July 20th, 2011, voting will start on July 22nd, 2011 and will last until July 30th, 2011. Cornell Pump reserves the right to modify or cancel the contest at any point.
No comments:
Email ThisBlogThis!Share to TwitterShare to FacebookShare to Pinterest 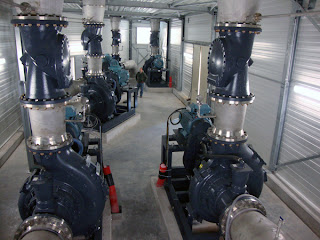 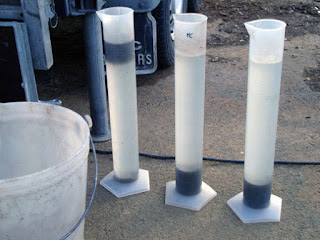 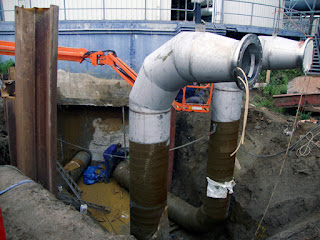 Before the installation of this new process, the sludge circulation to the decantation basins were producing foam and the particles were floating at the waters surface. Too much air was being trapped with the sludge particles and the particles were not settling to the bottom of the decantation tanks. It was then decided that another step needed to be added to the process: pumping sludge from the lower tank to the upper tank with CORNELL SELF-PRIMING PUMPS. The SELF-PRIMING PUMPS help remove the excess air from the sludge before it is pumped into the upper tanks and comes into contact with the surface mixers. See here a picture of the tests, taking samples before and after the addition of the CORNELL SELF-PRIMING PUMPS. 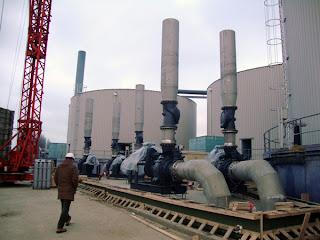 Because of Cornell's SELF-PRIMING capacities, HYDRO+ could install the pumps at ground level in a new building. Each of the CORNELL SELF-PRIMING PUMPS connected to the suctions of the three lower tanks, which in turn, pumped to the upper tanks. The civil works was therefore minimized (The corps' Civil Works program involves flood control, water supply, hydroelectric power generation, navigation, recreation, and environmental regulation. The boundaries for the Civil Works program often follow watersheds or parts of watersheds). 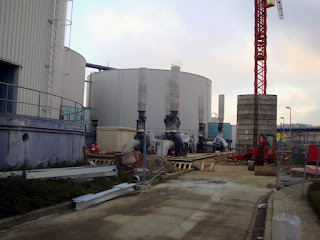 Cornell's SELF-PRIMING PUMPS also aided in the removal of air bubbles that were trapped in the water (which at times can be heavily loaded with air). From time to time but mostly during slow pumping periods, one could actually hear the vacuum pumps extracting the air that had already been separated from the water by turbulence. That means that without the SELF-PRIMING PUMPS, the main pumps would lose their prime because of the excess air. These pumps now have two functions within the HYDRO+ application: The initial priming at start-up and extracting the excess air during the pumping process. 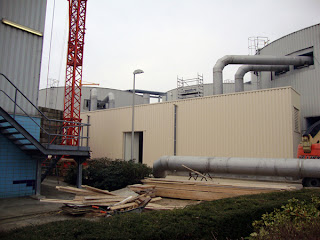 These pumps are driven by 90kW electric motors and are controlled by variable frequency drives that operate between 400rpm and 600rpm at the pump shaft. The maximum hydraulic efficiency of the pumps are 87.3%!

Thank you to Nicolas Lefèvr of HYDRO+ for providing the information for this article.

We want to see your best images of Cornell Pumps in installations including Municipal, Agricultural, Industrial, Refrigeration and Food! We ask that you use our uploader (click link for page) ... but you can also email them into us here at pmclean @ cornellpump.com. Contest begins now and ends June 30th, 2011.